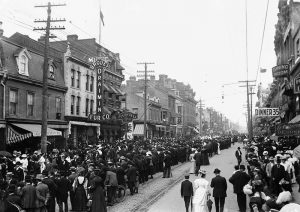 As noted earlier, bed bugs became plentiful in North America with the coming of European settlers. As a deterrent, beds were often made from sassafras wood and the crevices doused with boiling water, arsenic and sulfur.

This provided only temporary relief. As villages became cities, life became crowded with people and bed bugs from around the globe. Ships and railroads afforded ideal accommodation for the bugs, and rapid transit to where they had not been before.

Hotels and boarding houses were especially buggy, and smitten travelers unwittingly carried them from place to place in their trunks and satchels. Vigilant travelers learned to pull beds away from walls and immerse the legs in pans of oil.

Others relied on pyrethrum powder: “Dusted between the sheets of a bed, it will protect the sleeper from the most voracious hotel bug.

It is during the late 1800s when the first mentions of the phrase warning against bed bugs appear. “Good night, sleep tight, don’t let the bed bugs bite.”  This suggests that the expression could have indeed been an actual  warning, urging people to be on guard against the biting of these pesky creatures.