Bed bugs are reddish-brown, small–about ¼” long-wingless and very flat. They prefer to feed on human blood, although they may bite other warm-blooded animals, including pets. During the day, bedbugs hide near the bed. They use heat-seeking thermo receptors to find their sleeping victims at night.

Life Stages: Eggs hatch into nymphs, newly hatched nymphs are tiny-about 1/16” of an inch. Nymphs go through 5 molts to reach adult size and they must feed before each molt. Females can produce 5-7 eggs per week, laying up to 500 in a lifetime. Bed bugs grow fastest and lay most eggs between 72°- 80°F. They feed only on blood when people are sleeping or sitting quietly, often when it’s dark.

They seek shelter in cracks and crevices when not feeding. They poop out “blood spots.” Spots look like dots made by a fine felt-tipped marker. You’d see them near where they fed and near their hideouts. Adults can live over a year without a meal. Can be found in the cleanest of clean places. But clutter makes them harder to get rid of. They have no “grooming behavior”- meaning that insecticides meant to be swallowed by roaches and flies won’t work on bed bugs.

Bat bugs: The differences between these two pests are subtle and more often than not, only a trained professional would be able to tell the difference. Bat bugs and bed bugs look almost identical in body shape and color. The most useful identifying feature is their hair; a bat bug has longer hairs on their upper thorax than those of a bed bug. It is very difficult, if not impossible, to see this difference without the use of a microscope.

As for behavior, both are blood-sucking parasites that feed on warm-blooded mammals. Although both feed exclusively on blood, their preferred host varies. Bed bugs prefer feeding on humans, while bat bugs prefer bats, as their name suggests. Bat blood is essential to the survival and reproduction of the bat bug, however, they have been known to feed on other mammals, including humans when abandoned by their bat hosts. 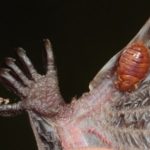 Bat bugs are often found inside a structure when bats have established a colony in attics, wall voids, unused chimneys, or any uninhabited areas within a building. Typically, bat bugs will be found in cracks and crevices in bat roosting areas.

Swallow bugs are found commonly in barn and cliff swallow nests, but readily invade the structures and bite humans as well. They are not incriminated as vectors of any diseases to humans, but their bite is known to cause minor to serious reactions on humans. The swallow bug is distinguished from other, similar species by its antennae, where the last two segments are the same length. This species also tends to be a grayish brown color, rather than the reddish brown of the Human Bed Bug.

Poultry bed bug: In a breeder facility, hens and roosters, typically in high 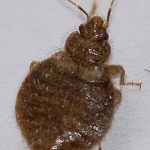 numbers, are used to provide hatching eggs for broiler production. Several regions of the broiler breeder facility may serve as shelter and hiding places for bed bugs. Typically, feeders and waterers are hung over platforms made of wooden slats that provide excellent shelter for bed bugs. Also, the corners of galvanized metal nest boxes and cardboard boxes used to transport eggs are typical sites for bed bugs. Because of the high density of animals and the resulting stress, heavy infestations of bed bugs in chicken houses may lead to excessive feather loss, cloacal irritation, lesions on the breast and legs, and even anemia in extreme cases. Consequently, production may be decreased, feed consumption may increase, and egg spots from bed bug fecal deposits may be observed, potentially diminishing the value of the eggs as well as the profitability of the chickens.

NOTE: The eggs and meat are not harmed directly by bed bugs. However, there can be indirect harm such as anemia from blood loss. Bed bugs are not like ticks that remain attached to animals. They just feed for a few minutes and then run away, so the chickens themselves when sent to market should not have any bed bugs on or in them. 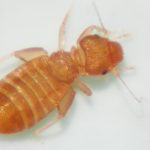 Psocids (Book Lice) are tiny little bugs – about 1/16 ” long and they are not actually lice at all and are harmless. But, they are still bugs and must be dealt with accordingly!

If you’ve got any dried out or decaying plants, you might find these little critters enjoying a plant buffet, or they may even be lurking around your stored food.

For identification purposes, the head and abdomen of a book louse appear large, and the midsection is narrower. Huge, compound eyes protrude from the sides of the head. They also have thread-like antennae that sweep back toward the abdomen. Not all book lice have wings, but some do (usually the book lice that stay outside), and when they do, there are four of them – two smaller front wings and two larger back wings. Most of the ones you will be hunting indoors should be wingless book lice.