A is For Ants!

Ants and their and their inherent ability to adapt have enabled them to become one of the most successful species on Earth, but also sees them evolving into a formidable pest in homes and businesses in the U.S and around the world. Here are several fascinating facts you probably don’t know:

The mental power of ants is in no way proportional to their size. In experiments they have been able to learn their way through highly complex mazes and communicate the correct path to their colony almost immediately.

They live in colonies often containing millions of individuals. Spotting a foraging scout ant in your home or office inevitably means that there is a colony nearby. Since the individual ant’s primary function is to sustain the colony, it is a certainty that any food source will be communicated quickly to the workers. 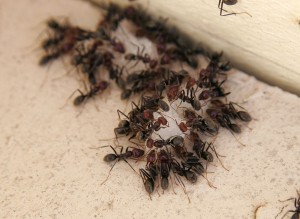 For example, a single Queen colony can evolve into a multi-Queen system. This increases the growth of the colony in direct proportion. Aggressive fire ants from warring colonies with single Queens have evolved into ‘friendly’ colonies with multiple Queens, creating huge problems in the warmer states.

There are More than 700 Species in the U.S. Alone!

Although not all species are prone to infest structures, the ones that are can quickly become a source of frustration and concern to both homeowner and businesses alike by contaminating food and damaging property.

Strategies to Prevent Ant Problems:For individual homeowners a few simple steps will help. A) Eliminate moisture or standing water close to the structure: B) Keep tree branches trimmed back from the house…….At signs of a larger problem contact The Aardvark for immediate resolution.

Methodology to Resolve Larger Problems for Businesses, Institutions and Homeowners:A full process of Integrated Pest Management is the most effective way to address pest issues. First identify the species involved. Each species has differing characteristics and ability to evade the treatment methods. Find exactly where the colony or colonies are. There could be many and they WILL be working together. At this point, application of specifically chosen controlled substances will be required, followed by improvement and rectification of contributing factors which allowed the intrusion. Follow-up investigation, monitoring and corrective action will be provided if needed.